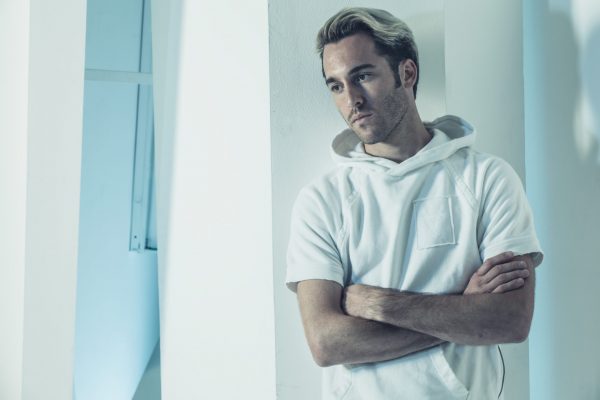 Armed with talent and a passion for music, Traveler continues to keep his finger on the pulse of the latest trends in electronic music. Having crafted a new genre dubbed “Psy-Wave”, the Los Angeles-based DJ/producer is on the verge of showcasing his creation. The new sound combines elements of psychedelic trance, dubstep, and melodic elements, manifesting itself into a sublime, invigorating melody.

The independent producer has been gravitating toward micro tuning his works, which keeps the sound frequency of his projects below the normal 440 Hertz. The change in frequency allows for a more ambient experience, pleasing the ear and radiating positive influence on the human mind and body.

Traveler’s latest single, “Bigger Than Us”, takes advantage of micro tuning, emitting 432 Hertz. The track presents itself as a blend of ethereal trance beats with a punch of psychedelic acid bass. The cut is available for download via Traveler’s own Outside In Movement Recordings.

Prior to its release, Traveler sat down with BPMFIT to speak on his latest projects. Under the ornate ceilings of L.A.’s NoMad Hotel, Traveler opened up about creating new genres, micro tuning, and his times at Burning Man.

Q: Last time we spoke you were pitching this interesting concept to me, a new genre. What can you tell us about Psy-Wave?

Traveler: Psy-Wave is a combination of styles using the psychedelic soundscapes of psychedelic trance and psychedelic dubstep with the melodic elements of new wave or deep house. There’s lots of driving basslines, chord progressions and melodies.

Q: What is it about Psy-Wave that would captivate a listener?

Traveler: I think what captivates people is the combination of sounds mixed with a really good chord progression to bring you back to something musical, to something that gets stuck in your head.

Q: Is it safe to say that you want to be the torch-carrier for this new genre?

Traveler: Absolutely. I think a lot of people are making it and it hasn’t been defined yet. You know, you go to some of these West Coast festivals like Lightning in a Bottle, Symbiosis or Burning Man and you hear the sound, but there’s no one that’s really like, come out and done it and taking it to the mainstream.

Q: Why have you chosen to micro tune your work and produce it at 432 Hertz?

Traveler: I’m just trying to get people to ask why. Why are we making music at 440 Hertz? Why is that the standard? Why don’t we try other frequencies because neuroplasticity shows that the brain reacts differently to different frequencies. And there’s so much scientific evidence in numerology with everything from megalithic structures, alignment to the stars, and the vibrations of different animals like an elephant rumble, or whale calls that fit in these spectrums of sound.

Q: When you’re not in the studio, what do you like to do for leisure?

Traveler: I have a talented girlfriend who just opened a store so I’ve been helping her out with that. I have two older brothers that both live within a few blocks so we hang out a lot. I have a really tight family. But I do have a vice.

Traveler: I am an avid Super Smash Brothers player. I try to limit the amount that I play, but I have a group of friends who play with me and we go so hard, bro.

I go to the gym and I do yoga, but I mean, the video game thing is like, I’m winning. [laughs]

Q: What are your favorite music festivals?

Traveler: I’m a co-founder of Envision Festival Costa Rica, so I’m super impartial to it. I tell everyone it’s the best festival on the planet. It’s totally organic, sustainable, and they keep as small of a carbon footprint as you could possibly get for doing a festival at that scale. It’s in the most amazing setting. The music’s killer, there’s awesome speakers, yoga, and the food’s phenomenal. You can rent a house to camp there. Everyone’s in such a good mood.

Q: You’re also an avid Burner. How many times have you attended Burning Man?

Traveler: Every year since 2008. So about 12 years. I skipped one year, actually.

Traveler: I always tell people to get ready for the highest highs and the lowest lows. But you’re always stronger for it. But if I could give anybody recommendation don’t go to Burning Man to see music, go to Burning Man to get lost and go check out some art because that’s what it’s all about. Getting lost on your bike and going in and meeting random people that do something cool, that will change your life.

Q: You closed out 2019 with a track alongside Friz titled “Rest Easy.” What can you tell me about that record?

Traveler: I made that track with Friz, who’s a newcomer to the label. It was actually one that he had started and then he sent it over to me and I really liked it. It had a chord progression already as well as some melodies so I just beefed it up and added the second drop, the bass line, top melodies, and the glitches. I think it’s a good example of Psy-Wave.

Q: What can we expect out of Traveler for the remainder of 2020?

Traveler: I’ve kind of neglected releasing music because I’ve had my focus on other projects, but my goal in 2020 is to release a song every month. I have an album in the works for the end of the year. Everything I’m making is in 432 Hertz, you know, so I think that’ll gain a lot of exposure.