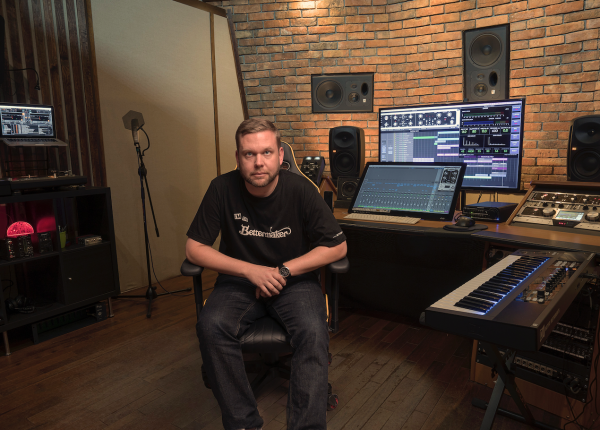 As I glanced over the turntable I was able to catch a quick view of some of the tracks he had prepared for his two-hour radio takeover. A wide assortment of songs were lined up on his laptop waiting to be mixed, from radio-friendly pop tracks to hip-hop bangers and EDM anthems. In that mix were also some of  his top-charting remixes and they were all perfectly curated to be presented in a 120-minute worldwide radio broadcast on Dash Radio live from Los Angeles’ Dream Hotel.

It wasn’t until that moment that I realized how truly diverse Maro Music’s catalog of records was. The Polish native (whose real name is Marek Walaszek) has managed to become one of the most sought out producers in the industry due to his eclectic sounds and has teamed up with artists from across the musical spectrum.

If that wasn’t impressive enough, in 2011 he launched Bettermaker, a manufacturer of professional-grade mixing and mastering hardware and software built for professional musicians and audio engineers. The award-winning, critically acclaimed hardware can be found in the studios of some of the best known producers from Dave Pensado, Jimmy Douglass, Luca Pretolesi and Greg Wells.

We caught up with Maro Music in Los Angeles as he was preparing to attend the National Association of Music Merchants (NAMM) in nearby Orange County. The 34th annual convention holds the Technical Excellence and Creativity (TEC) Awards, where he was nominated for his Bettermaker Mastering Equalizer. 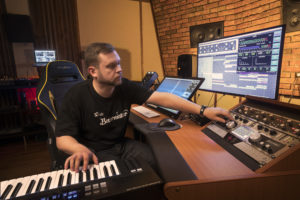 Q: You attended The National Association of Music Merchants (NAMM)  in Anaheim a few weeks ago, what keeps bringing you back to it?

MARO MUSIC: I’ve been attending NAMM for over ten years, since before I had Bettermaker. As a fan of music, NAMM is the best place to be–you have DJ equipment, stage, and studio gear. And the best thing is you get to meet all your favorite artists as you walk around the floors. I’ve seen Kendrick Lamar, Stevie Wonder, and of course a lot of EDM artists.

Q: For someone that has never experienced NAMM, how would you describe the event?

MARO MUSIC: It’s the Disneyland for music lovers. And it’s right next to Disneyland! There’s music seminars, a lot of concerts and talent shows, and industry mixers that make it a great place for networking. And, of course, there’s the most prestigious award in the audio industry— The TEC Awards.

Q: You were nominated at this year’s TEC (Technical Excellence and Creativity) Awards, right?

MARO MUSIC: Yes, I’m nominated for my mastering equalizer, it’s my seventh nomination for that award.

Q: Congratulations! Explain to me the idea behind your company, Bettermaker, which makes professional mixing and mastering hardware.

MARO MUSIC: I came up with the idea as a producer of music and a mixing engineer and trying to better the process. The main idea is that we make one hundred percent analog gear that can be recalled–meaning, when you close up your project and open it back up, it resets to the state that you had it previously. I wanted to have something that would be both analog and digitally recalled.

Q: Who are some of your clients? I hear you have some big producers that use your equipment.

Q: You’re also known to take chart-topping tracks and give them your own sound by remixing them. Recently, you’ve remixed “Taki Taki” by DJ Snake featuring Selena Gomez, Ozuna, and Cardi B. and “Thank U, Next” by Ariana Grande. How do you decide what top song you want to remix?

MARO MUSIC: I need to feel the vibe of the song. there are many songs that are number one, but I need to have an immediate urge to make something more out of it or adjust it.

For example, with Ariana Grande’s track, I  really wanted to play it in my set but I couldn’t because it did not fit with my sound. So I knew if I wanted to play it, I would need to up the tempo and add a nice drop. I needed to build something around that song so it would be playable in my arena.

Q: Sometimes the remixed version of a track gains more traction than the original. Is there pressure for you to create a great remix?

MARO MUSIC: No. I’m not trying to concentrate on topping something. When I remix a song it’s because I want to make it better for myself, how I would do the song if I did it first. Or how I would make the song sound like if it played on my sets.

Q: Does that come easier now that you’re further into your career?

MARO MUSIC: Of course! Five years ago I would be so concentrated on making a perfect track, but I would stop myself every time I thought it was done because something wasn’t right— I needed to change snare or add a drop…I was my main critic.

Now I work much faster. Ninety percent of the time I already hear what I want to do with the song, and I have years of experience and the tools ready for me so I don’t work on it for a long time. The Ariana Grande remix was completed in two days.

Q: Having been in the industry for as long as you have, how have new media and streaming services changed the EDM scene?

MARO MUSIC: It’s changed everything. Twenty years ago if you wanted to be an EDM producer, you had to collect records. You had to have synths and work in separate rooms. Right now you can do it on a laptop in between sets on the plane, in a hotel or in your bedroom. The evolution is huge.

Q: As a producer, is the drastic change a good thing or a bad thing for the music industry?

But I also feel very secure about myself. I don’t feel threatened by all the new guys coming in. I’m comfortable in what I do and I know what my sound sounds like.

Q: And what is your sound?  I ask this because you produce very different types of tracks and you’re not tied to a specific genre.

MARO MUSIC: People put labels on stuff, I do not. I do so many different types of music that if someone would ask me what I specialize in, I wouldn’t be able to say. In one day I can produce a hip-hop track, a radio-friendly EDM pop track, and bash out a heavy house/tech banger. I don’t really care about genres.

When I do care is when it comes to production for hire.  If someone comes to me and says, “I want my song to have a future house sound” then I have to concentrate on what they want and specifically do that genre.

Q: Is it difficult to market yourself because you’re not producing one specific style of music?

MARO MUSIC: No. But the problem comes with the industry because they always want to place me somewhere and it’s difficult because I don’t have any alter egos. Every track I make is under Maro Music, whether it’s a house track or a trap track.

But that shows that I can be a chameleon and everything is going inside the same bag. It might be confusing to people that are listening to me for the first time and hear one track and say, “I like this” and then hear a completely different track and ask, “is that the same guy?”

But there are so many examples of artists that changed their names to match the style of music, like Fatboy Slim, and there are others, like Skrillex, who don’t.

MARO MUSIC: I’m working on an album, but because of all the different sounds I have I don’t know if I want to make a conceptual album or do a double album. For me figuring out a conceptual album is easy because I just pick the songs I want to release that have the same sounds.

I am also going to continue working on my radio show, “Addicted to Music” every Friday at 4 p.m. PST on ElectroCity on Dash Radio. It’s primetime traffic hour so I get to showcase a lot of my work to a big audience.

Q: Finally, what is the number one thing you have learned in all your years in the industry?

MARO MUSIC:  If you want to make it, you need to be stubborn as hell and be prepared for a huge rollercoaster ride. One day you can play the biggest festival and the next day wake up with a maxed out credit card. Do you. Don’t follow the trend too much. It’s ok to be inspired and adjust, but remember that you have a story to tell.

For more information on Maro Music follow him online: