From its inception, Lightning in a Bottle set itself to be different, calling itself a “transformation” festival. The emphasis of the week-long event is to promote creative expression, social cohesion, and sustainability through workshops, talks and immersive art installations.

Over the years, the event’s co-founders and producers, The DoLaB, have used venues across California to host their annual celebrations, most recently, San Antonio Recreation Area in the Central California town of Bradley.

After announcing their move from Bradley in January, Lightning in a Bottle has revealed their new venue for 2019— Buena Vista Lake, just east of Bakersfield. The location change allows for not only an expanded footprint but for easier access, being directly off Interstate 5 and Highway 119, on the outskirts of Bakersfield. 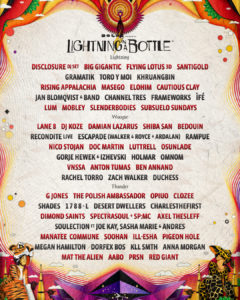 The 2019 edition of Lightning in a Bottle takes place May 8th – 13th at Buena Vista Lake in Central California. For tickets and camping passes CLICK HERE. 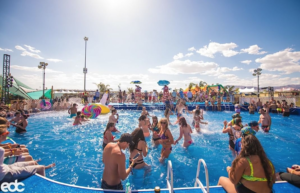 Three of Insomniac’s brands will host afternoon pool parties from 1pm-5pm, with Bassrush hosting Friday, May 17, HARD Recs on Saturday, May 18, and Insomniac Records on Sunday, May 19. Some of the artists performing include Born Dirty, SAYMYNAME, JOYRYDE, Justin Martin and Walker & Royce. 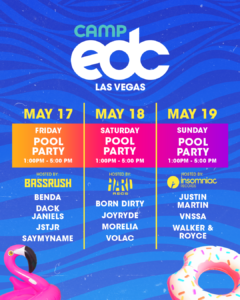 The pool party experience will only be available for guests camping onsite at Camp EDC. A limited number of camping packages are available and can be found HERE. 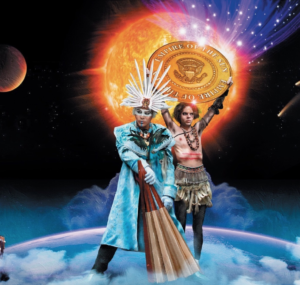 It’s been ten years since the world was first introduced to their euphoric synth sounds of Empire of the Sun. Their debut album, “Walking on a Dream”, was released in October of 2008 and the Australian duo have revealed their plans to celebrate this momentous occasion.

Beginning in May, the group will embark on an intimate venue tour, spanning major cities across the U.S. and two in Europe. Along with the tour, the duo will be releasing a special decade anniversary limited edition vinyl of “Walking on a Dream”. Set to be transparent blood orange in color, the vinyl will come with a free download of their previously unreleased track, “Chrysalis”.

An album and a documentary are the culmination years in the making for two of the the biggest names in trance music. The project took over the trance music scene like a rocket and fans of the two artists have been asking for more ever since.

Key4050 is the name of the collaborative efforts by John O’Callaghan and Bryan Kearney, and showcases the Irishmen’s talents in production; seamlessly blending genres of trance music and creating a new sound along the way.

After years of unreleased tracks and live performances at some of the biggest trance festivals (Dreamstate, Transmission, Subculture, and EDC Mexico), Key4050 have finally released their debut album, “Tales from the Temple”.

Referring to the historic Temple Theatre in Dublin where the two first met, “Tales from the Temple” is also the name of the mini-documentary that was released alongside their album. The 25-minute-long video explains the backstory to their collaboration, as well as what the name Key4050 means (we won’t tell you, you’ll have to watch and find out).

Take a stroll down Dublin with Key4050 as they explain their storied past in “Tales from the Temple” below: